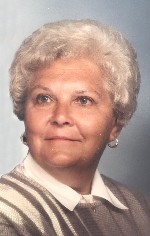 Print Obituary
Lillian “Lil” M. Burdge, 87, of Shiloh, IL, born December 1, 1931, in Central City PA, passed from this life on Tuesday, April 2, 2019, in the presence of her devoted family, at Cedarhurst of Shiloh.

Mrs. Burdge was the youngest of eight children born to Andrew and Mary Krishak. She graduated from Gallagher Memorial Hospital school of Nursing in Washington, D.C. in 1952 where she met and married her husband of 48 wonderful years, Adelbert “Dick” Burdge, Jr. While Dick served 20 years in the United States Air Force, and Lil worked as a registered nurse, they raised eight children and lived in Washington, D.C., Ohio, Newfoundland, Mississippi, and Germany. After settling in Belleville, IL, she worked for 35 years as a registered nurse and Nurse Manager of the C.M.U. (Psychiatric Unit) at St. Elizabeth’s Hospital. After retirement she and her husband traveled the country in a motorhome visiting their children and making many new friends. She enjoyed reading, sewing and cross-stitching. Lillian was a member of St. Peter’s Cathedral of Belleville, IL and Our Lady of Victory, TX. She was the sunshine in the lives of her family, friends, and caregivers. She led a life filled with love for God and her family. She was funny, loving, kind, and generous to whomever she met.

Lillian is blessed with numerous nieces, nephews, and a large group of friends from her days at St. Elizabeth’s Hospital.

Memorials may be made to the PJC Nursing Scholarship, 4810 Alben Barkley, Dr., Paducah, Ky 42003, the Alzheimer’s Foundation of America, 322 8th Avenue, 7th floor, NY, NY, 10001 or online at www.alzfdn.org, or to the Association for Glycogen Storage Disease at agsdus.org. Condolences may be expressed to the family online at www.rennerfh.com.