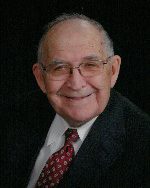 Lloyd was raised at Brushy Creek in Houston, MO, the youngest of five boys and one sister. He knew growing up on a farm, that farming was not for him. He turned to athletics at an early age and wanted to play every sport possible-even if his father Arthur didn’t approve. His disapproval was so great that when Lloyd broke his arm in a high school football game, his father reminded him to milk the cows in the morning.

He entered the University of Missouri on a basketball scholarship but played baseball as well.  In 1954, the baseball team (playing catcher) won the NCAA Baseball National Championship. That team is enshrined in the Missouri Tigers Hall of Fame.  His greatest accomplishment at Mizzou was getting nursing student and drum major Mary Engelhart of Fredericktown, MO to date him. They married in 1957 and enjoyed 60 years of a loving marriage.  After getting his Master’s in Education from Mizzou, he coached at Fredericktown before moving to Belleville to be an assistant coach at Belleville Township High School.  In 1966, Belleville East High School opened, and he was the school’s first athletic director for 10 years.  He was President of The Illinois High School Athletic Directors Association and a member of their Hall of Fame as well. At East, he also coached freshman boys’ basketball for many years.  He taught Drivers Education for 38 years at East.

In lieu of flowers, memorials may be made to Union United Methodist Church, Belleville, IL.  Condolences may be expressed to the family online at www.rennerfh.com.