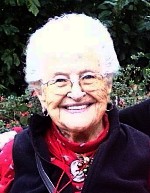 Print Obituary
Lorene Petri, nee Weber, 88, of Belleville, IL, born September 3, 1927, in Millstadt, IL, passed peacefully on Friday, August 26, 2016, at her residence in the Atrium of Belleville, in the presence of her daughters.

Mrs. Petri was a homemaker.  She graduated from Millstadt High School and attended business school before working in the payroll department of International Shoe Company in Belleville.  After raising her three children, she returned to the work force at Eckert Printing, and later as a secretary at Dixon Insurance and Real Estate offices in Belleville.  Her husband’s employment took them to central Florida where she resided for 42 years.

Lorene was preceded in death by her beloved husband of 59 years, Alvin James Petri, whom she married on January 4, 1947, and who died on May 19, 2006; her son, Terry James Petri; her parents, Alfred and Alvina, nee Haas, Weber; a sister, Dolores Toenjes; and a brother, Frederick “Joe” Weber.

The family expresses deep appreciation to the staff of Atrium of Belleville for their caring and competent service during Mrs. Petri’s residence there.

Memorials may be made Cure Alzheimer’s Fund at CureAlzFund.org or to a cause of the donor’s choice.   Condolences may be expressed to the family online at www.rennerfh.com.