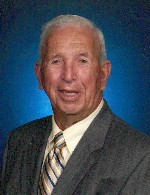 Mr. Stumpf was a retired farmer who enjoyed feeding out cattle.  He was a member of the Illinois Beef Association and past president of the Southwest Cattlemen’s Association.  Louis had also worked as a salesman for Pioneer Seed for 26 years.

Mr. Stumpf was a lifetime member of St. John’s United Church of Christ, Smithton, IL, and served as a past director of Belleville County Mutual Insurance Company.  He was a member of Freeburg Masonic Lodge 418, the Smithton Turner Society, and Millstadt VFW Post 7980.  He was a U.S. Army veteran.  Louis’ greatest enjoyments were gardening, eating good food, spending time with his family, and playing pinochle with his grandchildren.

Surviving are his wife of 56 years, Ruth E., nee Klingel, Stumpf, whom he married on August 8, 1959;
his daughter, Cheryl (Richard) Cantrell, and his son, Kevin L. (Jennifer) Stumpf, both of Belleville, IL;
three grandchildren, Matthew (Jennifer) Stumpf of Chillicothe, IL,
and Derrick Stumpf and Lanette Stumpf, both of Belleville, IL;
a sister, Lillian Boesewetter of St. Louis, MO;
a brother, Kenneth (Carol Jean) Stumpf of Freeburg, IL;
a sister-in-law, Marjorie Mann of Moro, IL;
a brother-in-law, Warren (Barbara) Klingel of Mascoutah, IL;
and many nieces, nephews, great-nieces, and great-nephews.

Donations in memory of Louis may be made to St. John’s United Church of Christ, Smithton, IL.  Condolences may be expressed to the family online at www.rennerfh.com.

We were sorry to here of your loss. Always enjoyed seeing Louie at the picnics and fish fries. Please accept our sympathy.
Bill and Pat Biehl

May God grant to you all the peace that passes all understanding during your time of grief and loss.Cousin Louie was one of a kind and we shall always remember his wit and humor.
God’s speed.

Keeping you all in my thoughts and prayers.

Keeping you all in my thoughts and prayers.

Patty and I will miss Louis. Our condolences to Ruthy, Cheryl & Rick, Kevin & Jennifer and all who knew this wonderful man. Scott & Patty Cooper

Our deepest sympathy to Ruth and all the family. Joyce and Bob

Our deepest sympathy on the loss of your father. Keeping you in our thoughts and prayers.
Allen, Cheryl, Melissa and Christina Lanter