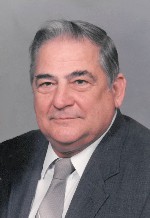 As a youth, Louis worked for Kroger. He joined the United States Navy and served from July 1950 to August 1954. On returning home, he worked for Union Electric (Ameren) and retired in May 1990 after 37 years of service. Louis loved to fish, hunt, and visit his clubhouse.

In lieu of flowers, memorials may be made to Randy’s Rescue Ranch (O’Fallon, IL) or the USO (St. Louis, MO). Condolences may be expressed to the family online at www.rennerfh.com.