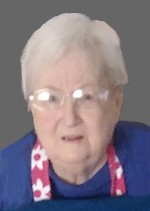 Mrs. Dooley was a homemaker and a secretary.  She was a member of St. John the Baptist Catholic Church, Smithton, IL, the Smithton Senior Citizens Club, and the Smithton American Legion Post 937 Auxiliary.

Louise was preceded in death by her loving husband of nearly 63 years, Leo F. Dooley, whom she married on March 14, 1953, and who died on February 15, 2016; her parents, Arthur P. and Inez E., nee Kirkley, Presnell; and two sisters, Wanda Lee Presnell and Doris M. Rainbolt.

Memorials may be made to St. Jude Children’s Research Hospital, to St. John the Baptist Catholic Church, Smithton, IL, or in the form of masses.  Condolences may be expressed to the family online at www.rennerfh.com.