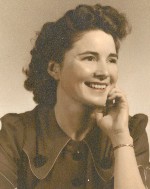 Memorials may be made to the Audubon Center at Riverlands, 301 Riverlands Way, West Alton, MO  63386, or to the Belleville Area Humane Society, 1301 South 11th Street, Belleville, IL  62226.  Condolences may be expressed to the family online at www.rennerfh.com.

Funeral:  In accordance with Louise’s wishes, private services and burial were held.