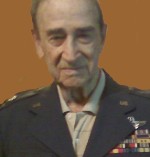 He was a member of St. Teresa’s Parish, Belleville, IL.  Bill was also a member of the American Legion, the Retired Officers Association, and NAUS (National Assn. for Uniformed Services).

He was preceded in death by his wife of 68 years, Angela, nee Qualiatti, Bilotti; his parents, Sylvester and Raffael, nee Mazzei, Bilotti; a sister, Eva Cicchini; and a brother, Frank Bilotti.

Funeral:  Memorial services will be held at 7 p.m. Wednesday at the funeral home.

So sorry to hear of the loss of your father. You all our in our prayers.