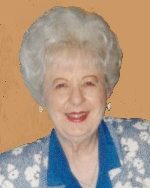 Mrs. Borsch was a former member of First United Methodist Church of O’Fallon, IL and the Belleville/Swansea Women of the Moose Lodge 1221. She was a homemaker and was employed at Scott Air Force Base and as a manager for Stanley Home Products.  Lucille enjoyed dancing and was a fan of the St. Louis Cardinals.

She was preceded in death by her husband of 72 years,  Elmer L. Borsch, whom she married on July 25, 1938, and who died on February 1, 2011; her parents, Francis and Phoebe, nee Hodgett, Westwood; a brother, Clarence Mullett; five sisters, Evelyn (Willard) Cook, Lillian (Emil) Fix, Irene (Bill) Taylor, Nellie Burns, and Mildred (Bill) Berger; and a brother-in-law, Emil Borsch.

Lucille’s family wishes to extend their appreciation to Carole Berger and Jules Johanson and the staff of Morningside of Shiloh for providing loving care to her around the clock.

Memorials may be made to Hospice of Southern Illinois or to St. Jude Children’s Hospital.  Condolences may be expressed to the family online at www.rennerfh.com.