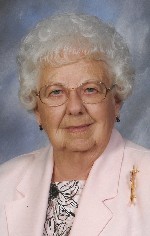 She was preceded in death by her husband of 53 years, Leo J. Zabawa, whom she married on April 14, 1948 in East St. Louis, IL, and who died on March 2, 2002; a son, Leo Frederick Zabawa; a daughter, Barbara Lucille Zabawa; her parents, Francis T. and Anna C., nee Wiegand, Stark; and a sister, Flora Stark Kiddoo.

Memorials can be made in the form of masses or to the charity of the donor’s choice. Condolences may be expressed to the family online at www.rennerfh.com.

Funeral:  A private Mass of Christian Burial will be at Our Lady Queen of Peace Catholic Church, Belleville, IL.