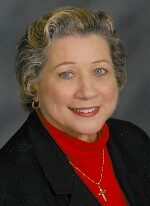 Print Obituary
Lucy Catherine Houck, nee Neff, 90, of Belleville, IL, born July 8, 1932, passed away peacefully on Saturday, September 3, 2022, at the Benedictine Living Community at the Shrine of Our Lady of the Snows, where she had lived for the last several years.

She was born in Belleville to Stephen and Mary, nee Mueth, Neff. Lucy grew up in Belleville one of 13 children and was part of a very large extended family. The Neff and Mueth families have been, for more than 150 years, well known for farming in the area south of Belleville.

She attended high school at Notre Dame Academy, in Belleville, and met and married her first husband, Charles Rutledge in 1953. She had four rambunctious boys, participated in her husband’s contracting business, shepherded all her children through their education and was a Den Mother through Cub Scouts and Boy Scouts, producing several Eagle Scouts. She divorced in 1987 after 33 years of marriage. For her second act, she went back to school at Southern Illinois University at Edwardsville, received a master’s degree in Clinical Psychology and was employed as a Psychotherapist at Mid-America Behavioral Health Care in Belleville until her retirement in 2004.

Lucy was a member of Our Lady Queen of Peace parish and spent many years doing scriptural readings at the Shrine of Our Lady of the Snows. While at the Shrine, she met and married her second husband, Lt. Col. Robert Houck in 1998. They had a wonderful, loving relationship and were very happy until his passing in 2005.

Lucy had a major vehicle accident in December of 2018, which limited her activity, but gave her the opportunity to form deeper relationships with all her sons and grandchildren, as well as all her friends at the Shrine. She will be sorely missed by family and friends.

Visitation: Friends may visit from 4 to 8 p.m. Thursday, September 8, 2022, at George Renner & Sons Funeral Home, Belleville, IL, and from 10 to 11 a.m. Friday, September 9, 2022, at the Apartment Community Chapel at the Benedictine Living Community.

Funeral: A Mass of Christian Burial will be held at 11:15 a.m. Friday, September 9, 2022, in the chapel at the Benedictine Living Community, with Fr. Eugene Neff officiating.