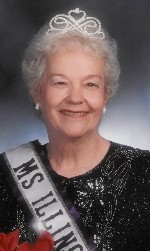 Mabel Grogan was a homemaker, raising five children, and had previously worked as a secretary at Parks College. She had a lifelong penchant for serving her church and community. She was president of St. Vincent de Paul for over 15 years. She was a recipient of the presidential lifetime achievement award. Mabel was Miss Senior Illinois 1999-2000, a published author, established artist, and member of The Silver Belles and a Beau dance group. She was member of the Red Hat society as well as many other organizations. Mabel was a member of St. Henry’s Catholic Church, Belleville, IL, she loved singing in the choir.

Memorials may be made to St. Vincent de Paul. Condolences may be expressed to the family online at www.rennerfh.com.