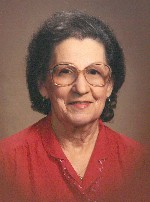 Mrs. Broyles was a retired seamstress.

Mae was preceded in death by her husband of 38 years, Joe Samuel Broyles, whom she married on October 11, 1952, and who died on April 4, 1991; a son, Michael Bradley; a daughter Nancy Byland; eight brothers; and six sisters.  She was the last surviving member of a family of 15 children.

In lieu of flowers, memorials may be made to the family.  Condolences may be expressed to the family online at www.rennerfh.com.

Visitation: Friends may visit with the family from 4 to 8 p.m. Monday, May 2, 2016, at George Renner and Sons Funeral Home, Belleville, IL.

It is with deep condolence I write this. My sympathy is deep and understanding. Your children David, Diane and Bill served you well. You will be long loved and missed.