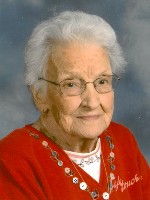 Mrs. Waeltz was previously employed by Smithton Grade School, Ralston Purina Corporation, and was a former Avon representative. She was a member of St. John’s United Church of Christ, Smithton, IL. She was a member of the St. John’s UCC Women’s Fellowship and the Smithton Senior Center. Marcella enjoyed spending time with family and loved to talk to family and friends on the telephone. Mrs. Waeltz loved baking and cooking, playing cards and Bunko, listening to country music, and watching game shows on TV. She was a St. Louis Cardinal baseball fan and loved to watch their games.

She was preceded in death by her husband of 58 years, Orville T. Waeltz, whom she married on January 7, 1943, and who died on October 14, 2001; her parents, Henry and Albertina, nee Schildknecht, Bernhardt; three brothers, Lavern Bernhardt, Donald (Jean) Bernhardt, and Delmar (Laverna) Bernhardt; and many brothers-in-law and sisters-in-law.

The family would like to give special thanks to the staff of BJC Home Healthcare and Heartland Hospice for their care and support.

Memorials may be made to St. John’s United Church of Christ or to the charity of the donor’s choice. Condolences may be expressed to the family online at www.rennerfh.com.