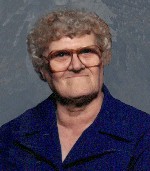 Margaret was a homemaker, a dog lover, and a music lover.

She was preceded in death by her husband of 41 years, Frederick Henry Hanradt, whom she married on October 6, 1943, and who died on June 15, 1985; one son, Herman C. Hanradt; her parents, Cameron B. and Nelle B., nee Boggs, Withers; two sisters, Betty Montgomery and Doris “Doad” Bone; and two brothers, Rod Withers and Bill Withers.

The family wishes to extend a special thanks to Cindy Kettler, Margaret’s caregiver for her compassionate care.

Memorial may be made to the Highland Animal Shelter, 510 West Monroe St., Highland, IL, 62249.  Condolences may be expressed to the family online at www.rennerfh.com.

Our condolences to you and your family Beatrice. You and Mark will always have an angel with you as your Mom knew how much you both loved and cared for her. We will be thinking of you both.

Kenneth and I offer our sympathy to your family on the loss of Margaret. Apologize that we cannot make the service, but know that she has had a great life and made lots of memories that will be with you forever. Think of Beatrice and Mark often, miss you.
Ken and Phyllis–Basic Hardware gang