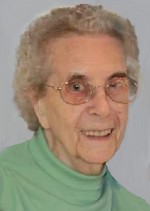 Mrs. Neff enjoyed bingo, crossword puzzles, word searches, and being with friends and family.  She will be remembered for making the best pies.  She was a member of St. Augustine of Canterbury Catholic Church, Belleville, IL, where she was also a member of St. Ann’s Altar Sodality and the Quilters Club.

She was preceded in death by her husband of 67 years, Raymond S. Neff, whom she married on January 27, 1942, and who died on October 25, 2009; two sons, Richard Neff and Dennis Neff; a daughter, Kathleen Neff; her parents, Harry and Flora, nee Klein, Wittenauer; two brothers, Henry and Mark Wittenauer; a sister, Rita Wittenauer; and a brother-in-law, Clarence Englerth.

The family would like to express special thanks to the employees and residents at Cedar Trails and at Freeburg Care Center for making Margaret’s last years so enjoyable.

Memorials may be made to the Alzheimer’s Association, to the Siteman Cancer Center, or to the Ministry to the Sick and Aged.  Condolences may be expressed to the family online at www.rennerfh.com.

Please accept my sincere sympathy for your loss of Your mother. My thoughts and prayers I extend to all of you