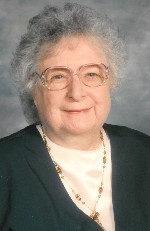 Marguerite worked in the telephone office at Scott AFB for 20 years before retiring.  She also was an accomplished pianist and played for her church in her younger years.  Her greatest love, surpassed only by her deep faith, was her children and grandchildren. Marguerite also had a deep love of all animals.

She was preceded in death by her husband of 28 years, Robert Young, Sr.; her parents, Robert and Fern Ettling; and a great grandson, Cristian Villarreal.