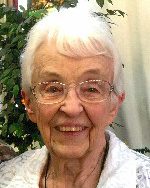 She was preceded in death by her husband of 63 years, Vernon E. Hoffmann, whom she married August 31, 1946, and who died July 15, 2010; her parents Henry and Anna, nee Niemeyer, Studer; a sister, Dorothy Wildt; two brothers, Vernon and Oscar Studer; and a grandson Dennis Hoffmann.

In lieu of flowers memorials may be made to St. Paul United Church of Christ, Belleville, to St. Paul Senior Living Community, Community Interfaith Food Pantry or Hospice of Southern Illinois. Condolences may be expressed to the family online at www.rennerfh.com.