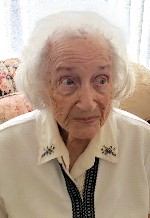 Mrs. Schaefer was a homemaker and worked at Schaefer’s Market with her husband for many years. She was a member of Cathedral of St. Peter Catholic Church, Belleville, IL, and volunteered at the church.

Memorials may be made to The Poor Clare Monastery of Our Lady of Mercy, Belleville, IL. Condolences may be expressed to the family online at www.rennerfh.com.

Funeral:  A private Mass of Christian Burial will be held at Cathedral of St. Peter Catholic Church, Belleville, IL.