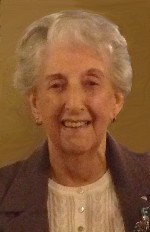 Marie was the youngest of eight children coming from a large Italian family. When she was young, she worked in her family’s fruit store, which was located on West Main Street, in Belleville. She went to school to become a beautician and worked for a short while at a beauty shop. She met her husband, Jack, who was an airman at Scott AFB. They got married, bought a house, and started a family. As the family grew and their needs grew, she applied for a job at Memorial Hospital where she worked in the lab as an administrative assistant for 11 years. She then spent five years as a secretary at St. Elizabeth’s Hospital. After retirement, Jack and Marie traveled to different states taking in the sites. In between these adventures she got a part-time job at the Hallmark Store in downtown Belleville. She loved that job because of all the new and old friends that she got to see and socialize with. She never met a stranger because most of the time they knew her relatives or friends. Marie’s friendly, outgoing personality was easily liked by everyone. Volunteering at the PSOP, the St. Francis Shop and being a member of St. Luke’s Church involved her in many activities, making more friends and reacquainting with old ones. She belonged to couple’s bridge group, the Sears Retirement Club, and the Belleville Senior Citizens Club. She also belonged to a local women’s group. It was the same group of women weekly and they became lifelong friends. Marie was an avid reader and enjoyed bowling, bunco, and crocheting. Her greatest joy was spending time with family. When all her siblings passed on, she focused on being around for all the family get-togethers, holidays, birthdays, and vacations. Marie was actively involved and present for her family and all the grandchildren, great-grandchildren, and the great-great-grandchildren. She was known as “Grams” and they received many warm hugs, kisses and advice from her. Her gentle manner and smile will be greatly missed by all.

She was preceded in death by her husband of 52 years, Jack N. Mank whom she married on June 4, 1947, and who died on August 17, 1999; her parents, Frank S. and Mary J., nee Mercurio, Tedesco; five brothers, Sam, Frank, Mike, Tony, and Saverio Tedesco; two sisters, Edna Caponi and Stella Luehder; and a son-in-law, Tracy Hartman.

Memorials may be made to St. Luke Catholic Church, or to the Wounded Warrior Project. Condolences may be expressed to the family online at www.rennerfh.com.