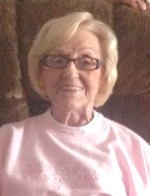 Memorials be made to the Arthritis Foundation. Condolences may be expressed to the family online at www.rennerfh.com.