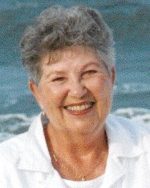 Marilyn graduated from Decatur High School in 1940 where, during her senior year, she met the love of her life, Bernard L. Hantle. They married on July 25, 1942 and celebrated 73 plus years to-gether.

As a part of the Greatest Generation, Marilyn went to work as a Secretary for Caterpillar Military Engine Company while Bernie served in World War II. Afterwards she spent most of her time as a homemaker while occasionally holding outside jobs. At various times her pursuits included playing tennis, bowling, bridge, and most of all playing golf. She was an avid St. Louis Cardinals Baseball fan. She was an accomplished seamstress who also loved musicals and playing the piano. Her fa-vorite song was “Bicycle Built for Two” and coupled with the Li’l Abner comic she became Daisy Mae to her family and friends.

She was preceded in death by her husband, Bernard L. Hantle, who died on July 14, 2016; her par-ents, Andrew Sr. and Viola (Hamilton) White; and a brother, Andrew Jr. (Lorraine) White.

Memorials may be made to Juvenile Diabetes Association; the Alzheimer’s Association or Hospice. Condolences may be expressed to the family online at www.rennerfh.com.