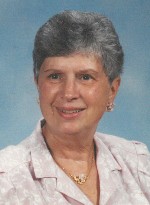 Marilyn was a retired loan servicing manager for Boatmen’s Bank. She was a member of St. Peter’s Cathedral, Belleville, Cathedral Mother’s Club, and a member and past-president of the Catholic War Veterans Auxiliary.

She was preceded in death by her parents, Arthur and Stella, nee Zahn, Stauder, and a brother, Ronald (Evelyn) Stauder.

She had the heart of an angel,
And a voice to match!
When she started to sing,
Every breath would catch.

Now she’s singing in heaven,
With the angel’s above.
Her voice will be carried,
On the wings of a dove.

Burial will be at Green Mt. Catholic Cemetery, Belleville, IL.