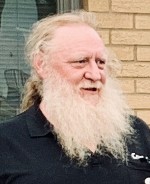 Print Obituary
Mark Russel Hutcheson, born June 7, 1959, to Patricia, nee Jeffrey, and George William Hutcheson, passed away at the age of 62, on November 9, 2021, to the great sadness of his kith and kin.

Born into a Catholic family of seven children, Mark learned to be kind, to share, and care for others early in life, traits which he carried into the grave. He had a habit of helping animals and people in need and tried to make a difference where he saw fit. Along the way he learned to be thrifty, creative, and value fairness as a core value. He was also a frugal soul, delighted by an opportunity to salvage and reuse an item, preferring to capture rainwater for use. Mark loved music of all kinds and wizard icons.

Mark loved adventure and spent a good many years traveling to places like Costa Rica, Cabo San Lucas, Brazil, Peru, and Argentina. He drove with a friend from the US to Chimbote, Peru, flew to Argentina, then continued by auto to Patagonia. Along the way they visited the Inca ruins of Machu Picchu and hired a private plane to fly over the plains of Nazca. Mark liked to say that Costa Rica would be his final home, since he loved the beaches and the people. After returning from safari in South Africa, Mark brought back exotic mounted heads of kudu and impala.

Mark was a character. He had bright orange hair as a young adult and given the nickname of ”Crush” or ”Crutch” by his friends after the soda, Orange Crush. In his middle years, he preferred wearing the long beard and was often described as looking like a member of the ZZ Top crew.

Mark worked as a contractor, home builder, and entrepreneur most of his life. He worked in the Houston area building homes, then as a builder on returning home to Belleville. In closing years, he spent his time as a small bar owner, property manager, and fishing in the Belleville area. His annual pig roasts were particularly popular among local residents and his work crews.

Mark will be sorely missed by his siblings David (Laura), Jill (Dennis Byrne), John (Gail), Anne (Gery) Roth, Margaret “Peggy” (Steven) Blades, and Michael; and by his dog Z. Mark will be remembered for his kindness, charity, and compassion for others, and of course, for that wicked beard.