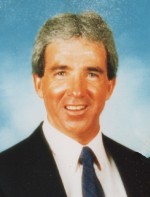 Print Obituary
Mark S. Wallace, 68, passed away peacefully surrounded by family at Columbia University Hospital’s ICU, Columbia, MO, on May 10, 2017, after a short struggle with ILD, a rare lung disease.

Mark was born in Jefferson City, Missouri on April 4, 1949 to Jack and Marie, nee Heimann, Wallace. He was a 1967 graduate of Althoff Catholic High School and attended SIU. Mark, or “Rocky” as they called him in Belleville’s sports circles, was a prolific softball player and could always be found playing soccer at Peace Lutheran with his friends or washers at Lake of the Ozarks.

Mark served in the Army National Guard and was employed by Stag Brewery, Ozark Airlines, and Illinois Distributing.  He was a D.A.R.E./Resource Officer at Belleville East High School and retired from the Belleville Police Department in 2004.  After retiring, Mark and Donna moved to Osage Beach, Missouri.

Mark was preceded in death by his parents, Jack and Marie Wallace.

He is survived by his wife Donna, nee Piper, Wallace;
a son, Colin of St. Louis, MO;
two brothers, Barry and his wife Margie of Tybee Island, GA,
and Shawn and his wife Michelle of Denver, CO;
nephews, Charlie and Jack Wallace;
niece, Aimi Pruden;
and numerous (and we mean a lot) of beloved cousins.
He is also survived by aunts, Rosalea Withouse of Belleville, and Mary Heimann of St. Louis.

In lieu of flowers, if friends desire, memorial donations may be made in Mark’s name to Governor French Academy, to the Pulmonary Fibrosis Foundation (http://pulmonaryfibrosis.org/), or to the charity of the donor’s choice.
Condolences may be expressed to the family online at www.rennerfh.com.

Funeral:  A memorial service will be held at 2 p.m. Saturday, May 20, 2017, at George Renner & Sons Funeral Home, Belleville, IL.  Interment will be at Lake View Memorial Gardens, Fairview Heights, IL.

Donna and Colin, We are so sorry to hear about Marks passing.Please accept our deepest sympathy and know we are thinking of you and your family. Mary, Gary and Andy Siebert

We are truly sorry for you loss, please accept our heart felt sympathy for you loss of a Son, Brother, Husband, Father and Friend.
Casablanca Hair and Skin Care
Terry & Bill

Donna, Colin, Barry and Shawn. Mark embodied all the great things growing up in Belleville, IL in the 1960s & 70s. I remember him most as a great sports enthusiast. Among many experiences I recall since he lived in our neighborhood, Mark and I lifted weights in a local gym and we played many soccer and softball games. He also liked cars since he had a Red 1964 Pontiac GTO, and a very special Honda 305 Scrambler.

I will be unable to attend the visitation since I’m traveling and will miss all the good stories and memories about Mark to be shared among the good friends and Wallace and Withouse families.

I’m truly sorry for your loss.

Dear members of the Mark Wallace Family,
On behalf of everyone connected with the Governor French Academy I thank you for selecting us as one of the memorial agencies for Mr. Wallace. We are honored by your faith in us.