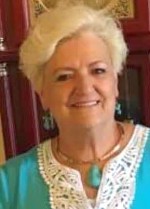 Mrs. Fietsam was a sales associate for Famous & Barr before her retirement. In her earlier years, Marti was a licensed beautician until she took on the role of motherhood and closed down her shop to raise her children.