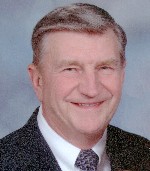 Marv retired after a 40-year career as a design engineer, first for McDonnell Douglas, then Emerson Electric and Boeing.  He was a longtime member of the Knights of Columbus, the Loyal Order of Moose, and St. Augustine of Canterbury Church.  For enjoyment, he loved the outdoors, especially hunting and fishing with his family and close friends.  Marv was a devoted sports fan, always catching local football, volleyball, basketball, baseball, and softball games.  He was particularly proud when watching his children and grandchildren compete.

Memorials may be made to the Parent Teacher Organization for Exceptional Children. Condolences may be expressed to the family online at www.rennerfh.com.