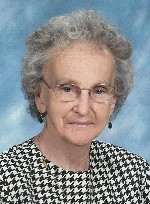 Mrs. Stehlick, a cancer survivor and avid bingo player, formerly worked at St. Elizabeth’s Hospital, Belleville, IL.  She was a member of St. Teresa Catholic Church, Belleville, IL, and the Young at Heart Club at the church.

Mary Ann was preceded in death by her husband of 47 years, George Stehlick Jr., whom she married on September 2, 1948, and who died on July 4, 1996; a son, Richard Stehlick; her parents, Herman and Agnes, nee Franke, Stuempler; and two brothers, John and Charles Stuempler.

Memorials may be made to Susan G. Komen Breast Cancer Research.  Condolences may be expressed to the family online at www.rennerfh.com.