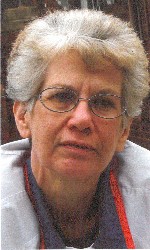 Mrs. Wodarczyk was a teacher, she worked in retail sales, and was a homemaker.  She received her Bachelor of Arts degree from Bradley University, Peoria, Illinois, in 1966.  Mary Anne was a member of St. Henry’s Catholic Church, Belleville, IL.  She was an avid crocheter and landscape artist, using both oils and watercolors.

Mary Anne was preceded in death by her parents, Herman and Margaret, nee Lord, Willkie.

Surviving are her husband of 50 years, Ronald S. Wodarczyk, whom she married on June 11, 1966;
three sons, Steven, Mark , and Tom Wodarczyk, all of Belleville, IL;
four grandchildren,  Rachel, Rowan, Eli, and Zoey;
and one brother,  Tom Willkie, of Peoria, IL.

Memorials may be made to Hospice of Southern Illinois, St. Paul’s Home or the Exchange Club of Belleville. Condolences may be expressed to the family online at www.rennerfh.com.

Visitation:  Friends may visit with the family from 4 until 8 pm Monday, October 24, 2016, at George Renner & Sons Funeral Home, Belleville, IL.

Burial will be at Green Mount Catholic Cemetery, Belleville, Ill.

My deepest sympathies to Ron and his family. Mary Ann was my cousin that I never got a chance to meet. I talked to her on the phone a few times and we emailed each other. I wish I would have had the chance to meet her in person. Rest in peace Mary Ann.