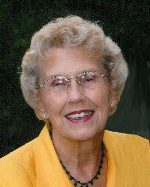 Print Obituary
Mary Arlene (Buenemeyer) Musec, died Thursday, October 26, 2017 at the Freeburg Care Center at the age of 86.  She was preceded in death by her husband, Ralph Musec, who passed away in May, 2017.

Arlene was born on July 19, 1931 in Germantown, IL, daughter of Bernard and Evelyn Buenemeyer.  Bernard earned the family income as an employee of the Cahokia race track, as a sole proprietor with his landscape nursery businesses, and as a politician within the Republican Party in the state of Illinois.  Arlene graduated from Aviston Community High School in 1948.

Arlene met Ralph Musec in an ice cream parlor in New Baden, IL.  Ralph was wearing his military uniform, and folklore tells us Arlene said, “Here’s a salute to you, soldier.”  Arlene later skated, on steel wheeled skates, from Germantown to New Baden to see Ralph.  They attended dances in New Baden, and when Ralph asked Arlene to dance, Arlene just knew “We fit together.”  Ralph and Arlene were blessed with 66 years of marriage.

Ralph and Arlene married on June 17, 1950 at St. Boniface Church in Germantown.  They spent their honeymoon in Colorado Springs, CO.  They moved their family to Belleville, IL in 1955 and became founding members of St. Augustine of Canterbury Parish.  St. Augustine served as the hub of their religious and social lives.  Friendships grew through the Confraternity of Christian doctrine held at individual homes.

Arlene worked as an administrative assistant at Scott Air Force Base shortly after their marriage.  She later operated strawberry farms in Centralia, IL in order to send her boys to Catholic schools.  Operating the strawberry farms meant living and working for up to four weeks a year in an isolated, rural environment, without telecommunication, air conditioning, potable water, nearby neighbors, or nearby healthcare services.

We will dearly miss you, Mom.

Memorials:  Memorials may be made to St. Augustine of Canterbury Catholic Church.  Condolences may be expressed to the family online at www.rennerfh.com.