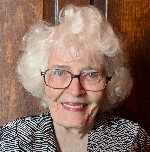 Print Obituary
Mary Margaret Cunningham, nee Keeley, 87, of Belleville, IL, born March 15, 1931, in East St. Louis, IL, died Wednesday, August 15, 2018, at her residence at the Esquiline Apartment Community at the Shrine of Our Lady of the Snows.

Mary worked at Stix, Baer & Fuller in the art department after high school and until she was married and became a homemaker. She was active in her children’s activities, having served as Cub Scout den mother, and using her love of sewing and painting, she often served as costume seamstress and crafter. She was very proud of her children and supportive of all family. Always supportive in her husband’s career, Justice Joseph was once introduced as “the man who came with Mary Cunningham.”  After her husband’s retirement, they loved to travel extensively, especially with their children and grandchildren. Mary loved the theatre and her most recent trip was to see “Hamilton” in Chicago. As a devout Catholic, she was happy to attend Mass at the Shrine and enjoyed serving as a lector when able.  She was a past member of the St. Clair County Women’s Club.

Mary was preceded in death by her husband of 55 years, Justice Joseph F. Cunningham, whom she married on June 20, 1953 and who died July 13, 2008; three sons in infancy, Robert, Edward, and William; her parents, William F. and Da-Niel, nee Sullivan, Keeley; one brother, William F. Keeley, Jr.; a daughter-in-law, Dr. Margaret Sullivan; a sister-in-law, Mary (William) Boyle; and a nephew, Edward Huster.

In lieu of flowers, memorials may be made to The Poor Clare Monastery, Belleville, IL.  Condolences may be expressed to the family online at www.rennerfh.com.

Funeral: A Mass of Christian Burial will be held at 11:15 a.m., Friday, August 24, 2018, at the Chapel at the Esquiline Apartment Community at the Shrine of Our Lady of the Snows, Belleville, IL, with Fr. Joseph Ferraioli, O.M.I. officiating.

Burial will be at Mount Carmel Catholic Cemetery, Belleville, IL