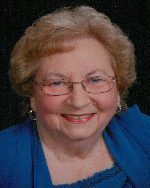 Print Obituary
Mary Elmore, 81, passed away peacefully on Saturday, February 10, 2018, at Freeburg Care Center. She was born on February 13, 1936 to Melvin and Ruth Englehart in Fredericktown, MO. She was also lovingly raised by Virginia Englehart after the passing of her mother as a young child. Mary was raised under the protective and caring love of “Daddy”, and her sisters, Ruth Brockman and Anne Wright.

She graduated from the University of Missouri with her degree in nursing and immediately married her college sweetheart Lloyd Elmore of Houston, MO. Mary and Lloyd lived in Fredericktown and had two children, L. Douglas and Virginia “Ginger”. Later, in 1963, they moved to Belleville, where their youngest, Phillip was born.

Mary taught nursing at Belleville Area College, later known as SWIC. She also worked at what she called her “dream job” as a school nurse. She worked at Belleville School District 118 and Red Bud School District. She loved this career because she never met a child she didn’t love, especially if they weren’t feeling well. Her love for children continued as she served as a court appointed advocate for children in the CASA organization.

Upon retirement she started her career as “grandma” to Brock, Paul, Kelsey, Nicole, and Stephen. Unfortunately, she didn’t get much of an opportunity to cuddle with her great grandchildren, Hallie and Addison. She would have loved to teach them how to bake cookies. She is survived by her children Doug (Candace) Elmore of Bethany, IL.; Ginger (Ron) Ekker of Ballwin, MO; and Phil (Barb) Elmore of Belleville; her grandchildren Brock (Kasia) Elmore of Glen Carbon, IL; Paul (Crysta) Elmore of Greenwood, IN; Kelsey Ekker of New York, NY; Nicole Elmore and Stephen Elmore, both of Belleville, IL; great granddaughters Hallie and Addison, as well as her sisters, Ruth Brockman of Alabama and Anne Wright of Missouri along with many nieces and nephews.

The love of her life Lloyd passed away January 3rd.  Mary made sure that Lloyd always had a meal ready for him and took great pride in their loving relationship. All the two of them wanted from each other was their complete devotion to each other. They traveled the world together, loved their children together and worshiped together at Union United Methodist Church.  Their love was evident from the early days in Columbia, MO to their last years at St. Paul’s, Cedarhurst and Freeburg Care Center.  It will be remembered by family, friends and caregivers as one of the greatest love stories.

In lieu of flowers The Elmore Family has a memorial fund for a future memorial to be named at Union United Methodist Church. Condolences may be expressed to the family online at www.rennerfh.com.

Funeral: Sunday, March 11, 2018, at 11:30 a.m. there will be a memorial service for Mary held at Union United Methodist Church, Belleville, IL,  in the main sanctuary. Interment of cremains of Lloyd and Mary together will be held at a private service in Cape Girardeau, MO.