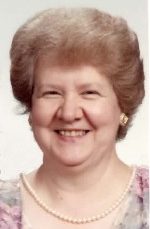 Mrs. Foran previously worked as the general manager of Dollar General in Mascoutah, IL. She was a former member of the Poor Handmaids of Jesus Christ order and was a cottage mother at Angel Guardian Orphanage in Chicago, IL. Mary Lou formerly served as Sacristan at Holy Childhood Catholic Church in Mascoutah. She was a member of the Swansea Women of the Moose Lodge #53.

She was preceded in death by her husband of 32 years, Edward G. Foran, whom she married on March 23, 1974, and who died on December 11, 2006; her parents, Aloysius F. and Estelle L., nee Robert, Bell; a brother, Frank Degenhardt; a sister, Ruth Ann Siebert; and a sister-in-law, Betty Ann (Tom) Ganey.

Special thanks are extended to Karen Sebastiao for all her love and support.

Memorials may be made to St. Mary’s Catholic Church, Belleville, IL, or to the Alzheimer’s Association. Condolences may be expressed to the family online at www.rennerfh.com.