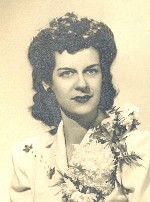 Eadie was a graduate of the Academy of Notre Dame in Belleville, IL.  She met her husband Lloyd on a blind date when he was on furlough during World War II.  She received her engagement ring by mail just before he shipped out to the South Pacific.  She worked in retail for many years at Famous-Barr in St. Louis and Maas Brothers after moving to St. Petersburg, FL, in 1971.  After retirement, she began volunteering at the Salvador Dali Museum when it opened in 1982 until 2011.  She was a talented seamstress, cook, and baker.

Mrs. Davis was preceded in death by her husband of 62 years, Lloyd W. Davis, whom she married on December 16, 1944, and who died on June 15, 2007; her parents, Henry and Freda Eickholt; sisters, Roberta DeMarse and Doris Kissel; brother, Henry Eickholt, Jr.; and special nephew and niece, Bill DeMarse and Roberta “Bobbie Lou” Carthy.

Memorials may be made to Suncoast Hospice, St. Petersburg, FL.  Condolences may be expressed to the family online at www.rennerfh.com.

Visitation:  Friends may visit with the family from 9 to 11 a.m. Saturday, November 14, 2015, at George Renner & Sons Funeral Home, Belleville, IL.