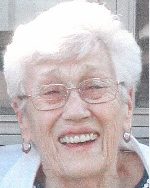 Mrs.  Nagel was a homemaker and school bus driver for Smithton Grade School. She, along with her husband, enjoyed going to flea markets, traveling, and especially time spent with family.

She was preceded in death by her husband of 57 yrs., Marvin P. Nagel, whom she married on July 16, 1955, and who died July 24, 2012; one granddaughter, Amanda Duecker; her parents, Basil D. and Ruth V., nee Anderson, Smith, and her father-in-law and mother-in-law Lawrence and Edna, nee Liefer, Nagel.

Memorials may be made to Trinity Lutheran Church.  Condolences may be expressed to the family online at www.rennerfh.com.