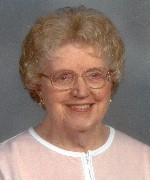 Mrs. Ruser was a homemaker who loved being with family and friends.  She was an avid traveler and a member of the Wally Byam Airstream Caravaners Club.  Mary also was a lifelong parishioner at St. Peter’s Cathedral, Belleville, IL.

Memorials may be made to St. Jude Children’s Research Hospital, Hospice of Southern Illinois, or masses.  Condolences may be expressed to the family online at www.rennerfh.com.

Mary Beth,
Please accept our sympathy on the loss of your mother. Our thoughts and prayers are with you and your family.

Joyce and I send our sympathy to all the family. While I did not know your mother well I knew your Dad from working jobs together and he built our house in the 60’s. God Bless you all. Bob Dintelmann