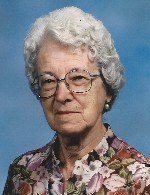 Print Obituary
Mary L. Schaefer, nee Neff, 103, formerly of Patterson, CT, and the Grand Court in Belleville, IL, went to be with her Lord and Savior on December 20, 2015, at St. Vincent’s Nursing Home, Quincy, IL, where she had resided for the last four years so she could be near her son and daughter-in-law, Roger and Karen Schaefer.

Mary was born August 2, 1912, near Paderborn, IL, south of Belleville, IL.  She graduated from Belleville Township High School in 1929 and then attended Southern Illinois University in Carbondale, IL, to obtain her teaching certificate.  She taught school in a one-room school house in rural St. Clair County and then taught at Cathedral Grade School in Belleville, IL.  She also worked for many years as a clerk at Keil’s Hardware in downtown Belleville.

Mary had been a lifelong member of Cathedral Parish in Belleville, IL, and an active member of the Cathedral Mothers’ Club and Perpetual Help Society prior to moving to Quincy, IL.  She was also a member of the United Food & Commercial Workers Union.

She mastered the arts of tatting and crocheting and spent many hours making items for others.  She loved to play bingo and was always very lucky at it.  She was always a teacher with her children and grandchildren, always stressing the importance of reading and higher education.

During her years at St. Vincent’s, she was loved and respected by residents and staff.  Many called her “grandma” and looked after her.  Again, she was always a teacher, asking the younger staff what their goals were and encouraging them to further their education.

Mary was preceded in death by her husband of 17 years, William “Bill” Schaefer, whom she married on May 30, 1940 at St. Peter’s Cathedral Catholic Church, Belleville, IL, and who died on December 18, 1957; her son, James Schaefer; her parents, Joseph and Lavina, nee Buehler, Neff; her sister, Eleanor Munier; and a brother, Clarence Neff.

My deepest sympathy to Roger, Mary, and the rest of the Schaefer/Neff families. I remember those days on Patterson Court very well, since we were so close by on Wabash. Your Mom was such a sweet lady and always so good to us Neff kids. May she rest in peace!