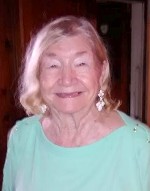 Mary graduated from East St. Louis High School in 1944. After graduating she worked in the accounting department of  the Frisco Railroad Co. in St. Louis MO. Mary and her friends loved going to dances where, in the spring of 1946, she met Jack Voland at a USO dance in Belleville, IL. They married on September 1, 1946.

Mary and Jack loved going to movies and dances. Jack was a musician and Mary attended many of his concerts. They had four wonderful children and enjoyed several vacations and many fishing trips in Wisconsin and Canada. Mary and Jack started their own business, Modern TV, where Mary was the secretary for eighteen years.

In her later years, Mary enjoyed watching classic movies and listening to music from the fifties and sixties. Mary was a member of the Greater Grace Missionary Baptist Church on Mascoutah Ave, Belleville, IL. She and Jack attended the United Church of Christ on South Douglas Ave. in Belleville IL.

Mary was preceded in death by her beloved husband of 65 years, Jack V. Voland, who died on September 17, 2011; her parents, Louis and Violet Bell, nee Myers, Gonzalez; her sister, Betty (Fritz) Moessinger; and a brother, Robert L. Gonzalez.