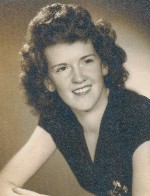 Mary was born April 17, 1921, the 4th of 15 children born to Ed and Grace Doonan in Elmvale Ontario.  At an early age, the family moved west and settled in Dawson Creek, British Columbia, part of the Peace River Country.  In her memoirs, Mary tells of the pioneer spirit of the people then and how hard they worked and how much FUN the kids had. A lot of the fun involved horses, and riding horseback to the one room school they attended. At 18, Mary and brother Jim, traveled back east to visit relatives.  Mary stayed and worked, and when WWII broke out, she joined the Royal Canadian Navy.  She wound up stationed in Washington DC where she met and married Cpl. Hugo Wessel, who was stationed there with the U.S. Army.  It was an adjustment leaving home and country and so every two years (for many years) a family car trip was made to Dawson Creek, British Columbia. The trip was five days each way.

Mary had a full, busy life in Belleville, supporting Hugo as the Wessel business was expanded, keeping the home fires burning and raising four children. Mary enjoyed bowling, fishing, playing cards, quilting with the ladies at St. Peter’s Cathedral, and feeding family whenever they would stop by. Aunt Clara commented once it was like Grand Central Station there at times! Her kids, grandkids, and great grandkids were her joy, and they all knew she loved them unconditionally.