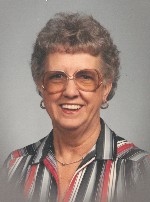 Mrs. Stahl was a housekeeper on a farm for 13 years, and then worked as a bookkeeper at Smithton Lumber Company before her retirement.  Melba enjoyed playing bingo and going on many tour trips with her husband.  She was a member of St. John United Church of Christ, Smithton, IL.

She was preceded in death by her husband, Wilbert A. “Wib” Stahl, whom she married on February 13, 1943, in Smithton, IL, and who died on August 19, 2016; a grandson, Donald Stahl; her parents, Edmund and Louise, nee Forcade, Schwaegel; two sisters, Margaret Augustine and Jeanette Ohlendorf.

Memorials may be made to St. John United Church of Christ, Smithton, IL.  Condolences may be expressed to the family online at www.rennerfh.com.

Living next door to my parents from 1955-1990, I have so many fond memories of both Melba and Wib. I will definitely miss seeing their smiling faces during my yearly trek to my hometown area! My condolences to all the family members they have left behind!

Have been missing Mr.& Mrs. Stahl from bingo for awhile. Our prayers and thoughts are with the family. Very nice couple, you would never see one with out the other God Bless.