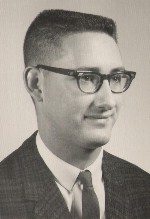 Print Obituary
Melvin R. Schubert, age 74, formerly of Freeburg, IL, died on Saturday, August 8, 2015, at 8:45 P.M. at the Lebanon Care Center, Lebanon, IL, where he had resided for about a year.  He had been in failing health for several years.

Condolences may be expressed online at www.rennerfh.com.

Per Melvin’s request, there will be no visitation and burial will be private at the Elmwood Cemetery in Freeburg, IL.