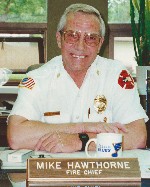 Print Obituary
Michael E. Hawthorne, 78, lost his off-and-on ten-year battle with cancer at his home on November 21, 2020, with his teenage sweetheart and adoring wife of 57 years, Kathleen “Kathy” Hawthorne at his side.

Mike lived and loved his life in Belleville, IL. He was a former letter carrier with the US Postal Service before beginning a 30-year career with the Belleville Fire Department, where he retired as Fire Chief in 1999. As early empty-nesters, Mike and Kathy were avid road-trippers like his parents before him. They traveled all 50 states, experienced many territories, and had an occasional international adventure.

He made many lifelong friends from his wide swath of life including bowling, ping pong, multiple softball leagues, radio control airplanes, model trains and cars. He was an original St. Louis Blues season ticket holder and was elated to see the 2019 Stanley Cup victory. He had a voracious appetite for history and trivia, and all kinds of music from Bill Haley to Iron Butterfly to Sons of The Pioneers. He rode motorcycles, played cards, told jokes, and swore brilliantly. He made annual fishing trips with his buddies. He colorfully coached his sons Khoury League baseball team and cheered at every football, basketball, hockey, track meet, horse show, and soccer game he could attend. He always carried a second job that added further flavor and friendship including surveying, Harter’s Hobby Shop, a contractor’s assistant with Marvin “Beanie” Meddows, Ideal Office Supply, and Dave Schmidt Truck Service. He remained active with the Belleville Exchange Club and Belleville R/C Flyers.

He was preceded in death by his parents, John and Regina Hawthorne; and two brothers, John “Jack” Hawthorne Jr. (Phyllis), and Ronald Hawthorne (Nancy).

Mike was not much on formality and given the current state of affairs, he would appreciate a kind thought, a simple joke or story told to friends, or watch an episode of The Three Stooges, Marx Brothers, or W.C. Fields movie in his honor.

Memorials in his name may be made to the Belleville Exchange Club. Condolences may be expressed to the family online at www.rennerfh.com.

Funeral:  The family is considering a memorial event in the future.

As Mike would say, “take five and smoke ‘em if you got ‘em!”