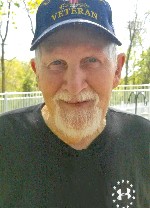 Mr. Wilson was a utility lineman and retired from Illinois Power / Ameren.  He loved the outdoors and was an avid deer hunter. Mike was a United States Navy veteran.

He was preceded in death by his wife of 54 years, Patricia Ann Wilson, nee Walsh; whom he married on July 3, 1965, and who died on December 18, 2019; a daughter, Lisa Marie Wilson, in infancy; his parents, Daniel Sr. and Martha, nee Stolze, Wilson; and a brother, Daniel Wilson, Jr.

He is survived by a son, Michael D. Wilson, Jr. of Festus, MO; a daughter, Paula Rae Wilson of Belleville, IL; his adoring grandchildren, Abigail and Samantha Wilson, who were the lights of his life; a sister, Sharon (Jeff) Erskin of Oxnard, CA; a brother-in-law, Frank T. Walsh, Jr.; and many dear nieces and nephews.

In lieu of flowers, memorials may be made to the Alzheimer’s Association. Condolences may be expressed online at www.rennerfh.com.