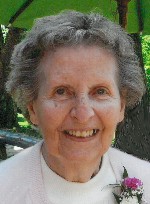 Mrs. Schmidt was a switchboard supervisor at the Shrine of Our Lady of the Snows Apartment Community for 32 years.  She was a member of St. Mary Catholic Church, Belleville, IL.  Minta enjoyed spending time outdoors, and especially loved time spent with her dear family as well as her dogs.

She was preceded in death by her husband of 18 years, Paul J. Schmidt, whom she married on April 12, 1947, and who died on September 8, 1965; a grandson, Paul J. Schmidt III; a grandson in infancy, Brian Schmidt; her parents, Ernest E. and Lucille D., nee Fiedler, Faith; two brothers, John W. Faith and Patrick R. Faith; a sister, Dorothy (Clarence) Yoch; and one brother in infancy, Jack Faith.

Memorials may be made to St. Mary’s Catholic Church, Belleville, IL or to The Belleville Area Humane Society.  Condolences may be expressed to the family online at www.rennerfh.com.

Burial will be in Green Mount Catholic Cemetery, Belleville, IL.