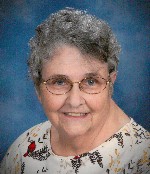 Miriam was the only child of William and Catherine Boehm. Growing up, she enjoyed attending St. Louis Browns baseball games at Sportsman’s Park with her dad and spent many an hour playing pinball while he bowled. An excellent student, she attended Beaumont High School in St. Louis where she graduated in 1958. In high school, she was proud to be the editor of the school yearbook. After high school, she worked as a secretary at St. Louis Trust Company before meeting her future husband, Herbert.

Following their marriage on September 9, 1961, they moved to Wisconsin where Herb served as a minister at several churches, and where their daughter Ruth and son Peter were born. Moving to Smithton, IL, in 1970 brought Miriam closer to home, and their youngest child Sarah was born.  They went on to become residents of Edwardsville, IL, before moving back to St. Louis. In her later years, Miriam and Herb moved to Freeburg, IL, where she died, after succumbing to Alzheimer’s disease.

Over the years, Miriam sang in her church choirs, was a member of women’s guilds, was a member of the Homemaker’s Club, and worked as a secretary for St. John’s United Church of Christ in Smithton, Smithton Grade School library, the Madison County Farm Bureau, and Children First Foundation in Edwardsville.

She loved music, was an avid reader, a bird watcher, a terrific cook, and spent countless hours canning the produce from Herb’s gardens.

Miriam and Herb enjoyed traveling the world, both on mission trips such as to Central America, Haiti, and Jamaica, and on vacations such as to the South Pacific, Europe, the Holy Land, and South America. They also enjoyed spending time with their children and five grandchildren.

She is survived by her children, Ruth (Bryan) Vogel of Freeburg, IL, Peter (Lisa) Stemler of Wildwood, MO, and Sarah (James) Harms of Freeburg, IL; five grandchildren; and one great-grandson; two brothers-in-law, Willis (Jan) Stemler of Waterloo, IL, and Vernon (Angela) Stemler of Pacific, MO; a sister-in-law, Carol (Robert) Johnson; and many nieces and nephews.

Memorials may be made to St. Paul’s United Church of Christ, Freeburg, IL, or to the Alzheimer’s Foundation of America.  Condolences may be expressed to the family online at www.rennerfh.com.