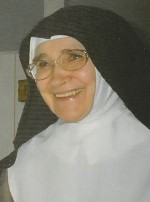 Print Obituary
Mother Marie Thérèse Tremblay, of the Holy Eucharist, first abbess of the Poor Clare Monastery of Our Lady of Mercy in Belleville, entered into eternal life on April 29, 2021.  She was 91 and looked forward to celebrating the 70th anniversary of her religious Profession this summer.

Born in Alma, Quebec, Canada on February 13, 1930, Thérèse Tremblay was the fourth of the twelve children of Arthur G. and Rose (Harvey) Tremblay.  Raised in a strong, faith-filled family, she knew early, by age four, that she wanted to be a Sister. At 18, she left home and homeland to begin her religious life in Brest, France, where the Poor Clares were struggling to rebuild their monastery after the ravages of World War II. It was there that she was invested with the Poor Clare habit on October 30, 1949, receiving her religious name, Sister Marie Thérèse of the Holy Eucharist, and that she professed her first vows on August 27, 1951.

The challenges of trying to restore a cloistered contemplative monastery in post-war France proved insurmountable and when the monastery of Brest was officially suppressed, Sister Thérèse returned to Canada in 1954.  God’s wonderful providence directed her to the recently founded Poor Clare Monastery of Our Lady of Guadalupe in Roswell, New Mexico.  The poverty, simplicity, fervor, and unity of the sisters deeply impressed the young French-Canadian nun who soon asked to be received into the community.  She and Roswell’s first postulant, Sister Mary Clare, made their Profession of perpetual vows on August 27, 1955, in the newly dedicated permanent chapel.

After her final vows, Sister Thérèse generously served her community as cook, portress, gardener, councilor, seamstress, and on-site carpenter.  In 1967, she was appointed assistant novice mistress and in 1977 she became novice mistress. As a vibrant and beloved “Dear Mistress,” she formed a generation of young nuns in St. Clare’s Gospel form of life by word and especially by the example of her deep love of God and joyful dedication to her community.

When Bishop James Keleher invited the abbess of the Roswell monastery, Mother Mary Francis, to make a foundation in his diocese, Sister Thérèse was appointed the on-site superior of the small band of Poor Clares who came to Belleville in June 1986.  She was elected first abbess of the Monastery of Our Lady of Mercy in June 1990, guiding her community in its formative years with generous, self-sacrificing love. It was to Mother Thérèse that God entrusted the inspiration for the design for the permanent monastery and chapel, construction in the form of the orb (the round chapel) and the cross (the monastic living quarters) which gives material witness to the heart of the Poor Clare vocation: prayer for the world rooted in the mystery of Christ’s saving Cross.

From November of 2008 until her death, Mother Thérèse served as vicaress of the Belleville Poor Clares, giving a beautiful witness of obedience and fidelity to her new abbess, and continuing to inspire the Sisters with her intense Eucharistic devotion and her loving assistance in all areas of Poor Clare life, especially as cook, baker and revered fount of wisdom.

She was preceded in death by her parents and six brothers, Jean-Marc, Rosaire, Marcel, Guy, Jacques, and Claude Tremblay.

She is survived by her five sisters, Rolande Desjardins, Francoise Tremblay, Madeline Tremblay, Andrée Tremblay-Asselin and Sister Rose Marie (Rachel) Tremblay, also a member of the Belleville Poor Clares, numerous nieces and nephews, as well as by her grateful Poor Clare family.

Memorial donations may be made to the Poor Clare community in Belleville, to HSHS Hospice or to Catholic Urban Programs. The gift of your prayers is greatly appreciated. Condolences may be expressed to the family online at www.rennerfh.com.

Funeral: A Mass of Christian Burial will be celebrated in the monastery chapel, with Most Rev. Michael McGovern principal concelebrant. Funeral services will be private, with interment in the monastery cemetery. Friends are invited to attend a month’s mind Memorial Mass to be celebrated by Bishop McGovern at St. Peter Cathedral in Belleville, IL, on Tuesday, June 1, 2021, at 4 p.m.