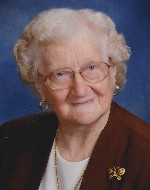 Muriel was born on a farm south of Hoyleton, Illinois and was the youngest of six where she grew up in a family of teachers. Muriel attended Hoyleton High School and graduated from Centralia Township High School in 1941. She went on to attend Illinois State University and graduated from a two year elementary education program. She then graduated from McKendree College with a four year teaching degree in 1960. She taught in the Sandwich (3 years), Hoyleton (13 years) and Scott AFB (16 years) school districts before retiring in 1987.

Muriel married Wesley Brink at the Sandwich Methodist Church in 1946 after he returned from World War II where he served in the South Pacific. They were married for 60 years until Wesley’s death in 2007.

Memorials may be made to Union United Methodist Church, Belleville IL.

Visitation: will be held from 9 to 11 a.m. Saturday, February 8, 2020, at Union United Methodist Church, Belleville, IL.