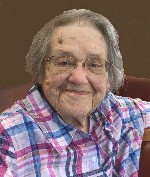 Mrs. Schilling was a homemaker and enjoyed quilting.  She worked on the family farm for 50 years. Myrna was a member of St. Michael’s Catholic Church, Paderborn, IL, and belonged to the Alter Sodality at the church.

She was preceded in death by her husband of 35 years, Rudolph “Rudy” Schilling, whom she married on February 27, 1965 and who died on February 29, 2000; a daughter, Mona Schilling; her parents, Edward and Anna, nee Weiss, Reynolds; and a brother, Edward C. “Sonny” Reynolds Jr.