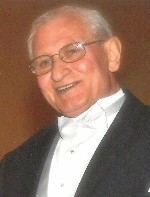 After attending technical high school in mechanics and metal trades, Nikolaos began his life’s journey as an apprentice engineer in the Greek Merchant Marine.  He sailed on cargo ships and oil tankers traveling between ports from Canada to South America.  He resided in New York City after coming to the United States, where he met and married his wife.  Nikolaos attended HVAC school and after graduating he began work on commercial heating and cooling installations as a metal trades journeyman for New York Steamfitters Local 638.  After his children were born, he relocated his family to Belleville, Illinois to be closer to his wife’s family.  He became a member of St. Louis Construction Laborers Local 42 and worked for several large construction firms including Fred Weber, Alberici Corporation, and Don C. Musick Construction.

After retiring he spent his time enjoying his grandchildren and his two favorite hobbies: cooking and gardening.  He had the world’s greenest thumb because he could make any plant or tree grow and produce.

Nikolaos was preceded in death by his parents, Michael N. and Milias, nee Klontzas, Kourinos; by his father-in-law and mother-in-law, Cletus M. and Louise A., nee Fellner, Koesterer; and by his brother-in-law, Andreas Kapetanos.

Although he loved flowers, the family urges you to make donations to St. Jude Children’s Research Hospital in lieu of flowers as a memorial for Nick or to any of the above mentioned churches.  Condolences may be expressed to the family online at www.rennerfh.com.

Private family burial will be held.