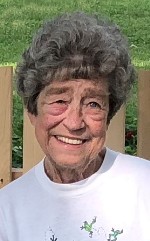 Nina worked for St. Elizabeth’s Hospital before her retirement.

She was preceded in death by her husband of 53 years, Joseph “Joe” Gerold Jr., whom she married on July 10, 1965, and who died on May 3, 2019; her parents, Constantine and Alma, nee Davitz, Jany; two sisters, Genell Alma Mueth and Fern Marie Jany in infancy; three brothers, Dana (Danny) Jany, Earl Jany, and Russell Jany;
and two brothers-in-law, Joseph Mueth and Ira Saxton.

Funeral: Funeral services will be held at a later date for Nina and her husband Joseph Gerold.